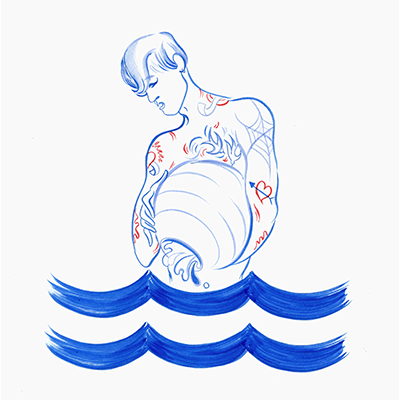 You might feel as if youre a lightning rod, attracting jolts of energy wherever you go. You are being cosmically empowered to set new intentions and change the direction of your trajectory. Youre prepared to crank up the volume on parts of your life that you have muted for the sake of others. The eccentric Aquarius New Moon zaps your 1st House of Identity, prompting you to transform your image and reposition yourself for future opportunities. You want to leave your imprint of originality everywhere you can, which could be shocking for everyone at first. Nevertheless, people will adjust as they eventually appreciate your authenticity. Strike while the iron is hot. Get Your Complete Cosmic Profile
24 January
Reblog
Share
Tweet
Pin it
Illustrations by Jo Ratcliffe

Richard: "While he’s avoided aggressively targeting gun owners, Biden has previously emphasized his commitment to holding gun manufacturers liable when one of their products is used in the commission of a crime." I hope that also applies to car makers, knife makers, shoe makers, and hammer makers as well since each of these items (not shoes particularly, but since hands and feet are counted) kills more people than all types of rifles put together. "Biden has cast himself as a relative moderate in recent months on gun-control. His campaign’s gun control plan, which was released in October, proposed reinstating an “assault-weapons ban” and universal background checks, but would not force the current owners of semiautomatic rifles to sell the guns to government..." That's not the action of a moderate, but of someone that's scared to death of a lawfully-armed citizenry. I always wonder why the left is afraid of law-abiding citizens with guns but are quite OK with criminals being armed to the teeth.