We may earn commission from links on this page, but we only recommend products we believe in. Pricing and availability are subject to change.
Rick Broida
August 9, 2022, 10:21 AM·6 min read

Are traveling salespeople still a thing? If so, they can travel a little lighter: The Wemax Go is a portable 1080p laser projector that measures only an inch thick and weighs under two pounds. It's entirely self-contained, running on battery power and built-in apps. And just because it's a business expense doesn't mean it can't handle the occasional movie night. (Shhh — we won't tell the boss if you won't.)

I spent some time putting the projector through its paces, and let me start with the most exciting part: Although it lists for $1,000, right now the Wemax Go Advanced is on sale for just $603. 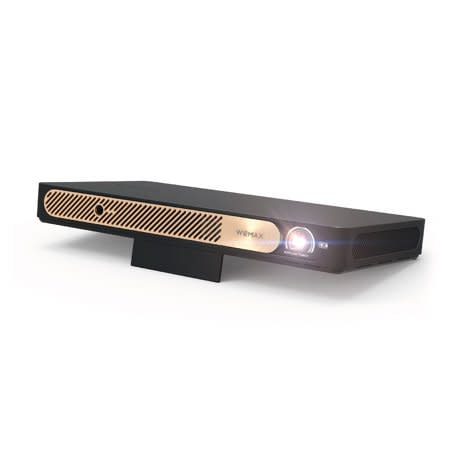 The Wemax Go Advanced is one of the most compact 1080p projectors you can get, and it's battery-powered to boot.

That price puts the Go Advanced in line with the Xgimi Elfin, another portable 1080p projector. But there's one key difference: The latter requires AC power; the Wemax can run for up to 90 minutes on its battery.

Obviously, that won't last you through most movies, but it's more than enough for a typical PowerPoint slide deck. And if you need more juice, you can plug just about any power bank into the Go's USB-C port (which is also where it charges via the included AC adapter).

It's hard to overstate just how compact this thing is; in your hand it feels like a slim hardcover book. Needless to say, it's incredibly easy to bring along, whether in a backpack, briefcase or carry-on.

A typical use-case here is at the end of a conference-room table, pointed at a projector screen on the wall. To that end, the Go Advanced has a small, hinged stand embedded in its underside; it can tilt the lens up a few degrees as needed.

A particularly nice touch is the gold-colored accent bar on the front edge, which actually serves a practical purpose: It covers and protects the lens. When you slide the cover left, it turns on the projector. Slide it back to turn it off again. There are no other physical controls, however; for everything else you'll need the included remote (which isn't backlit, sadly).

The Go Advanced is a native 1080p projector, a more-than-adequate resolution for most business presentations and informal movie viewing. Like a lot of projector makers, Wemax touts "4K support," but that simply means it can work with 4K sources; it doesn't upscale or anything like that. Wemax also touts 600 ANSI lumens, a measure of the projector's brightness. For comparison, the aforementioned Xgimi Elfin produces 800 ANSI lumens.

In the real world, this means the Go needs a relatively low-light environment to give you the best possible image, but it definitely doesn't need total darkness. In a conference room, you could probably get away with turning off the lights and closing the blinds.

I tested the unit in my basement, where I have a 100-inch screen already in place. It's relatively dark, the only daytime light coming from a small window. The projector managed just fine, generating bright, crisp, colorful images that I found very satisfying. Indeed, it crushes most of the portable projectors I've tried, which were dim and washed out. (They were also priced hundreds less.)

However, there are a few important considerations. First, the Go runs something called FengOS, which unfortunately no one will mistake for Android TV. It's a simple but limited operating system, able to run a handful of apps (like YouTube and the Firefox web browser) natively but requiring extra steps for the likes of Hulu and Netflix. If you do install those and other streamers, you'll sometimes have to use something called mouse mode (which turns the remote into a sort of floating cursor) to interact with them. Not fun.

Why not just mirror your phone or tablet and use that as your streaming source? The projector supports mirroring (which works quite well and can be great for presentations, product demos and such), but licensing restrictions prevent you from playing most commercial content. Rats.

My advice: If you want to stream, skip all this and plug in something like an Amazon Fire TV, Google Chromecast or Roku Streaming Stick. Those dongles may ruin the projector's aesthetic, but they'll give you a vastly superior, infinitely easier streaming experience.

Although it worked well overall, the projector did present a few issues. First, it seemed stuck in Eco Mode — which forces a lower brightness setting in order to preserve battery power — unless I connected a power supply. If this is intentional, it's bad design: I should get to choose the mode I want, regardless of battery status.

My bigger concern is with the auto-keystone feature, which promises to produce a properly sized, rectangular image even when the projector is placed above, below or to the side of the screen. There's also an obstacle-avoidance setting that can compensate for, say, a plant or painting that's partially blocking the image.

In my tests, none of this worked properly. In some cases the projector failed to make any discernible adjustments to the image; in others it overcompensated by shrinking it. I tried different angles, distances and so on; it never managed to properly fit the projection to my screen. I've tested other projectors that have auto-keystone, and I've never encountered this problem.

The good news is that the Go Advanced has simple manual controls, meaning you can adjust the corners as needed to achieve your desired rectangle. And the auto-focus feature worked perfectly every time.

Wemax Go Advanced: Should you buy it?

This is a really good projector, and it's a stone's throw from greatness. Super-compact and portable, it delivers a sharper, brighter image than many a larger model. If your business could benefit in any way from having a totally wireless projector at the ready, it's easy to recommend the Wemax Go Advanced.

It's also decent for the occasional movie, though I recommend using a streaming stick or something similar instead of the onboard app library. Just keep in mind that battery life is around 90 minutes at best (but easily supplemented by a mobile power bank), and the built-in speakers are weak and tinny-sounding (so consider packing a Bluetooth speaker as well).