We have received compensation to create this article, and receive commission from purchases made via links on this page. Pricing and availability are subject to change.
23
Elyse Moody
October 13, 2022, 8:00 AM·5 min read

Get the treats ready! You’re probably going to need them to trick your four-legged friend into donning one of these adorable Halloween pet costumes. That’s right, it’s the time of year when dogs and cats go head to head against babies to see who can be the stinkin’ cutest. Whether you love dressing your pet up as an everyday hero (like a mail carrier) or a comic book superhero—or transforming them into a whole other species—Walmart has plenty of Instagram-worthy options.

We’ve sorted through the Halloween aisle for you and found costumes for pets that meet our essential animalwear criteria: no trailing pieces that’ll get trampled or chewed up, no difficult buttons or snaps (Velcro only, please) and easy leash access. That means there's a chance your furry BFF just might enjoy these Halloween costumes as much as you will. 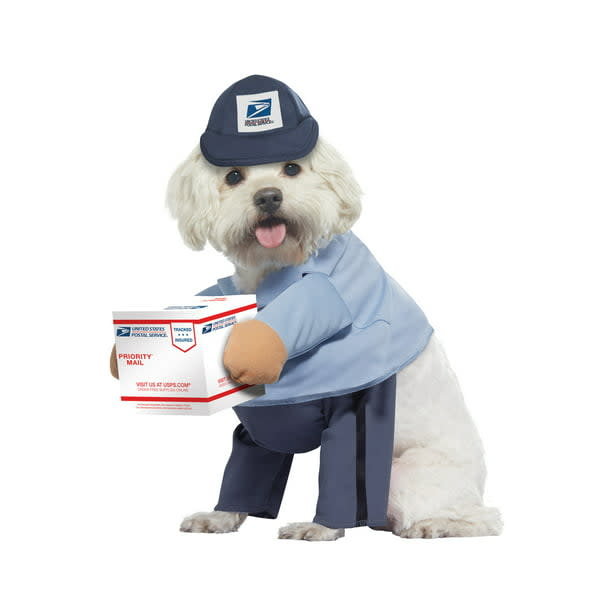 Dogs everywhere live to bark at the mailman. Halloween’s the perfect time to flip the script and let your pup deliver packages for a change. This special delivery outfit slips onto your dog’s front paws and fastens along his back, making him a look like a two-legged letter carrier. Gripped securely in the attached arms is an official Priority Mail parcel. The costume set, which starts at $20, is completed by an authentic USPS logo hat. Order it now so it won’t be late for your party or parade—Walmart has the shipping covered for you. 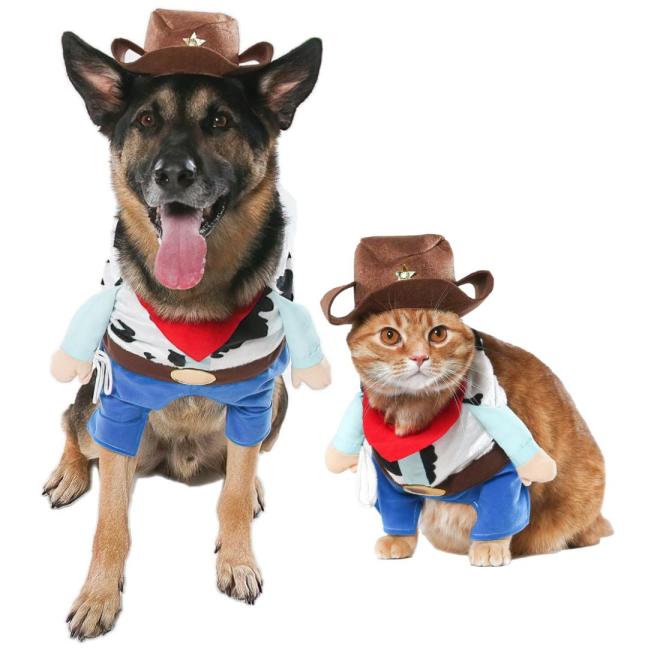 Giddy up little doggie (or kitty)!
$12 at Walmart

Get along little doggie...or kitty! This $12 Western-style stand-up costume comes in sizes to fit both canine and feline Woody wannabes. Just slip their front paws into the little Wranglers, fasten the Velcro closure behind their neck, secure the felt hat under their chin and teach your pardner the command: "Reach for the sky!" Don't worry about the bandana and rope becoming chew toys—they're securely sewn on. 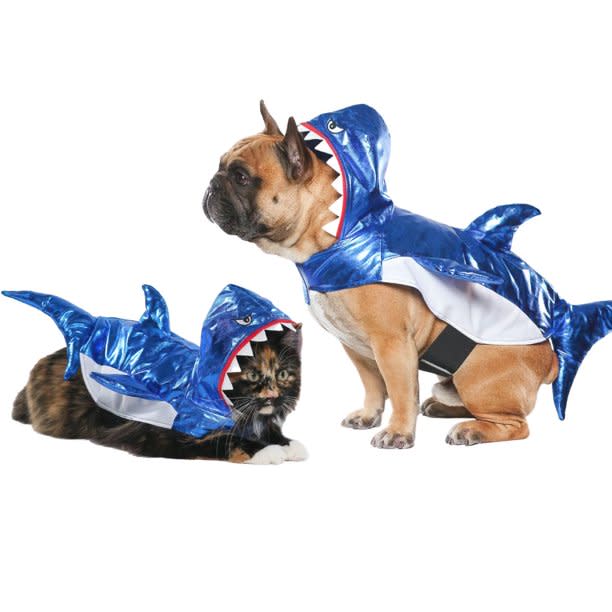 This costume will have you humming "(Fur) Baby Shark".
$12 at Walmart

Let your good boy or girl do Halloween like it's Shark Week. With its embroidered eyes, felt teeth and shiny metallic blue skin, this $12 hooded Jaws costume is great for pets who don't like a headpiece or something on their face or ears. It fastens behind the neck and at the waist with Velcro, and you can push back the hood. Firm padding ensures the fins—especially that dorsal fin—stand up in the most hair-raising way. 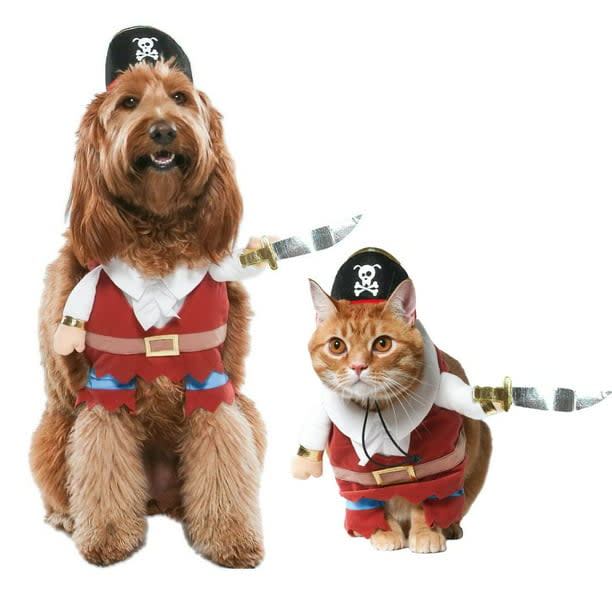 Don't be forced to walk the plank for forgetting Fido's costume!
$12 at Walmart

Scallywag just took on a whole new meaning. From the ruffled shirt to the tip of the attached sword, this swashbuckling $12 stand-up costume will earn your pup or kitten lots of Halloween booty. It's easy to put on thanks to the Velcro closure at the neck, and the skull-and-crossbones hat has ear loops. Now about that poop deck.... 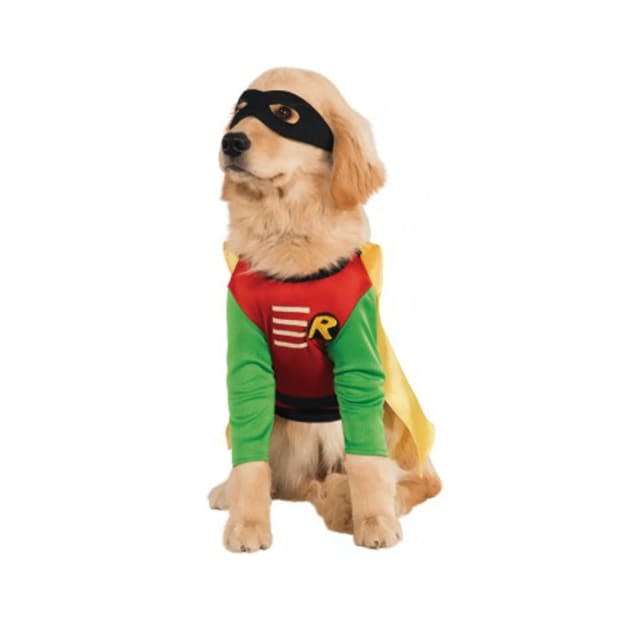 The perfect costume for your ever-present sidekick.
$13 at Walmart

Who's your favorite sidekick? They deserve a heroic Halloween, and this DC Comics licensed costume has plenty of POW! to go around. From the iconic R logo on its chest to the contrasting sleeves and zany eye mask, this suit is an authentic replica of the caped crusader's best buddy's. Yours will appreciate that the cape is removable, in case it starts to annoy them. Available in sizes 2X and 3X, it's ideal for bigger crime fighters. 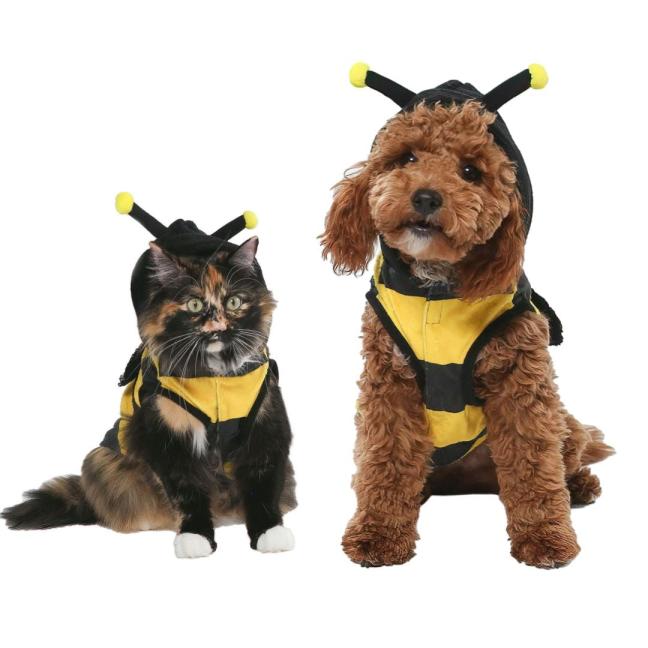 Your pet will be the buzz of the neighborhood parade in this getup.
$12 at Walmart

The buzziest costume for your dog or cat is also the coziest—and, at $12, a honey of a deal. This lined vest fastens at the chest with Velcro and has an attached hood. At the back, black flip-sequin wings turn silver when you pet them. Padded antennae and a stinger stand out on the hood and just above the tail. 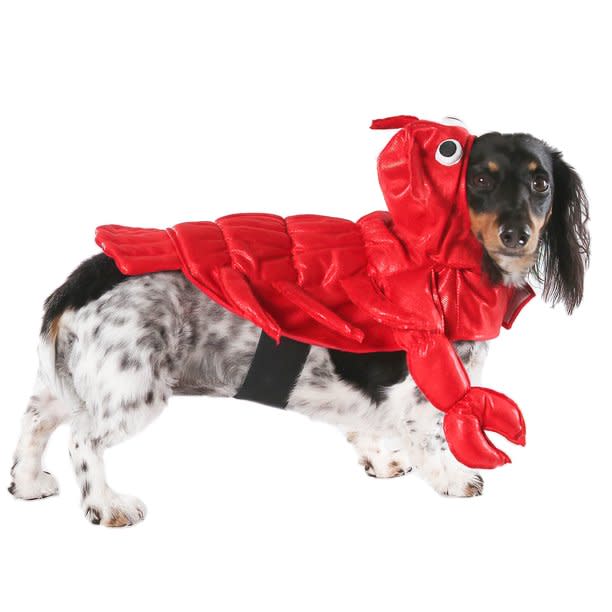 You butter believe this lobster costume will garner some laughs!
$12 at Walmart

Add a stockpot, and you've got the tastiest costume all cooked up for just $12. This crustacean's claws, walking feet and meaty tail are made of shiny red metallic material that's realistically padded and jointed for a three-dimensional effect. On the hood, google eyes and stand-up antennae add a cartoonish touch. It's essentially a cape—nothing attaches to your pet's legs, which could make it more tolerable. Just fasten the Velcro at the neck and snap a photo before they get steamed. 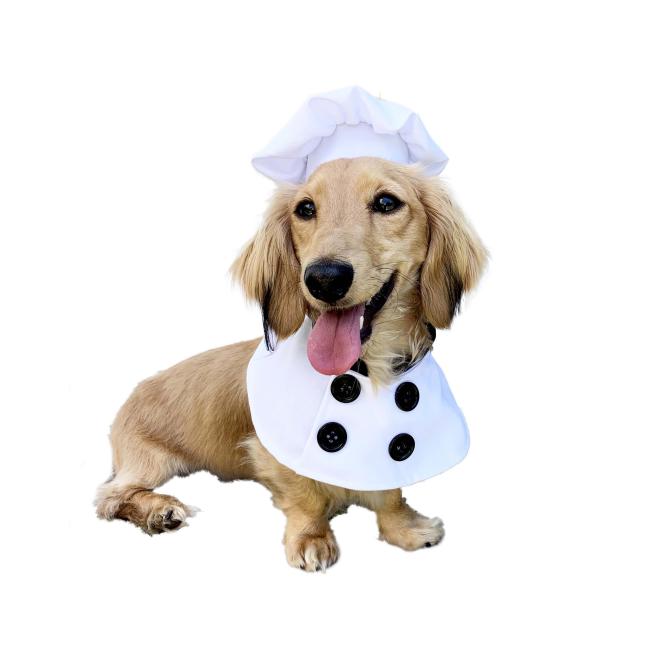 For the pup who's your shadow in the kitchen.
$20 at Walmart

I don't know about your pup, but the ones I know spend a lot of time in the kitchen thinking about food. A chef's costume is a natural choice for dogs who obsess over their next meal, especially when it's this easy—and inexpensive, at $20—to pull off. Don't let the shiny buttons dissuade you: These mini chef's whites fasten with Velcro at the neck like a collar. The (chef's kiss) final touch, that traditional toque blanche, has an elastic chin band that you can adjust to fit snugly. Secure it over the ears and let your kibble connoisseur get back to the stove. 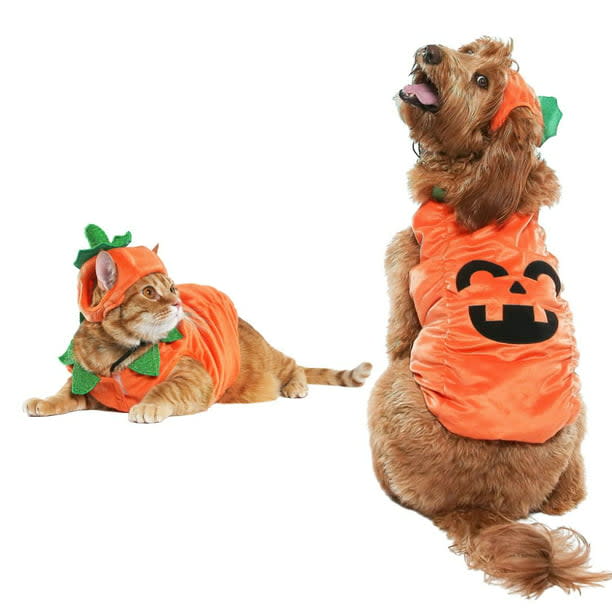 The perfect getup for your furry little pumpkin.
$12 at Walmart

No time to carve a pumpkin? Let your pooch be the star of your porch, greeting trick-or-treaters with this bright and toothy smile. This padded, seamed gourd suit fastens with Velcro at the chest instead of pulling over their head for minimal annoyance. The matching stem hat has an elastic strap with ear loops to hold it in place. For just $12, it'll definitely cast a friendly glow. 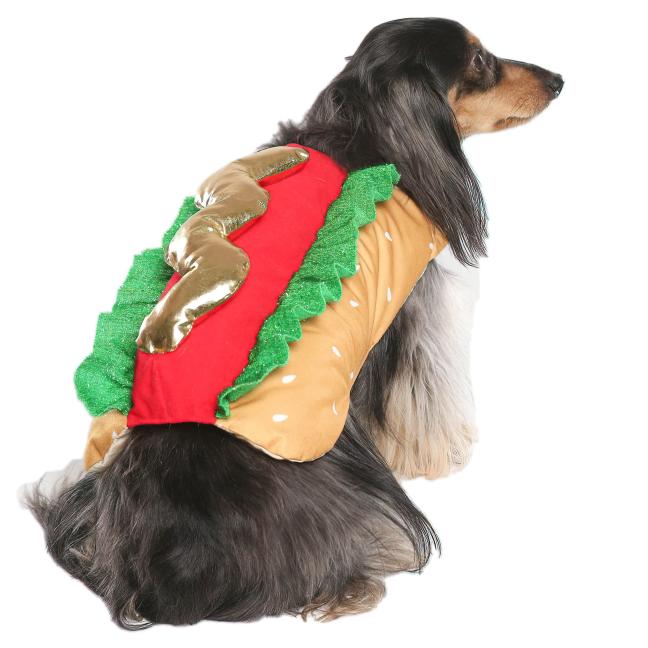 Summer's not officially over till the last hot dog sizzles. Savor it a little longer with this frankly perfect $12 hot dog costume for dogs or cats. The padded bun looks totally squeezeable, and it's topped with shiny metallic ketchup and mustard. With condiments this delectable along the back, there's no need for a headpiece (which your pet might appreciate). Just fasten with Velcro at the back and under the tummy, then relish the cuteness.