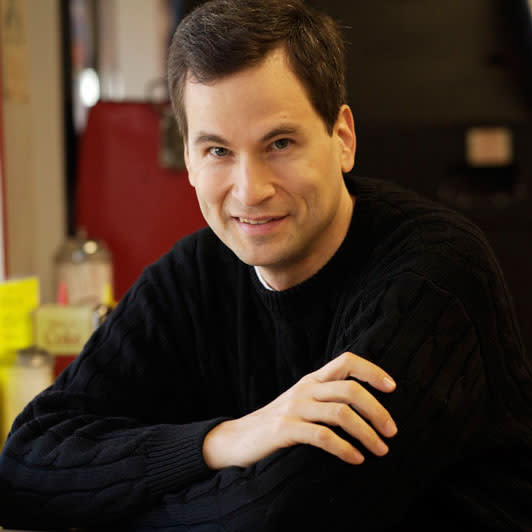 Enjoy this holiday preview from the writers of Yahoo Tech, which opens for real in January! See all of our holiday articles here, and like us on Facebook for more.

The best part of being a tech critic is the front-row seat you have to invention. Every time someone invents a new product, a new solution, a better way of doing something, there’s a moment of exhilaration. It’s endorphins in the brain. It’s the human race moving forward, if only by two or three inches.

And that’s why we celebrate, once again, the Pogie Awards, the annual year-end exaltation of the year’s best ideas in consumer technology. No, not the best products; sometimes the awards go out to fantastic features that wound up in lousy products. No, this is just about the individual ideas within products, the glimpses of genius that somehow made it out of the bureaucracy, past the lawyers and into the wider world.

Ready? Keep hands and feet inside the tram at all times. Off we go!


Not sure if you’ve heard: iPhone theft is a booming business in big cities. In New York City, for example, Apple picking (as it’s called) represents 14 percent of all crimes, producing the city’s first crime increase in 20 years.

Both iPhones and Android phones offer a “Find My Phone” feature, which lets you track down a stolen phone. Trouble is, all the bad guy has to do is erase the phone — and boom. You can’t find it anymore. It’s clean and ready to sell into the black market.

Well, not anymore. In iOS 7, Apple slipped in a mind-bogglingly brilliant new feature called Activation Lock. It’s very, very simple: Nobody can erase an iPhone — or turn off Find My iPhone — without entering the owner’s Apple password. Which the mugger almost certainly won't know.

A phone that can’t be used, erased or resold is as useful to a thief as a brick. Once word gets out that stealing an iPhone is useless, thieves will have to find some other way to make a living. Home construction or church work, maybe.

With surprisingly little fanfare, Sprint has begun installing an FM radio app in every new phone model, starting with the delicious HTC One.

I know, I know: Don’t we already have hundreds of Internet radio apps? And Pandora, Spotify and iTunes Radio?

Yes. But the NextRadio app has one towering advantage: It doesn’t use any data.

It turns your phone into an actual FM receiver (the earbuds are the antenna) — without using one single megabyte of your monthly data allotment. In an age when using Internet services on your cellphone can be very expensive, a feature that reduces the amount of data you use is a big, big deal.

NextRadio is also interactive: You can buy a song you’re hearing with one tap, respond to contests instantly, post what you’re listening to and so on.

But music that consumes no data, with only one-third the battery drain: That’s a really big deal.

Many of the features in the Nest Protect smoke detector ($130) could have been Pogie-award nominees in their own right. The calm voice that says, “There’s smoke in the bedroom” instead of blasting out a shrieking alarm. The night light that comes on automatically to light your way when you walk by. The friendly, verbal advice that your batteries are running down — again, without wailing in the middle of the night. The way you can hush a false-positive alarm (shower steam, bacon smoke) by waving your arm four times instead of hunting for a ladder or a mop handle.

But the biggest idea is the wireless connection. Nest Protects talk to each other in your house (even if you don’t have a home WiFi network), so you’re alerted whenever there’s smoke or carbon monoxide in a different room. They’re also online, so your cellphone lets you know about anything amiss, too, wherever you may be. Because after all, a smoke alarm going off without your knowledge is like not having a smoke alarm at all.

Apple’s MagSafe connector, first introduced in 2006, was sheer brilliance: a magnetically attached laptop power cord. If someone trips on the cord, it snaps out harmlessly instead of dragging your $1,000 laptop to the floor.

And then came the MagSafe 2. This “improved” connector, born in 2012 and now standard on all Apple laptops, features a thinner, weaker magnet. Much weaker. It falls out all the time. Uncross your legs — it falls out. Turn to reach for a beverage — it falls out. Yell at the TV — it falls out.

Desperate Mac fans have tried to Frankenstein together all manner of kludgy solutions, from clothespins to duct tape. But that dark era is behind us now, thanks to the Snuglet ($20 for two).

The Snuglet is a tiny metal liner for the laptop’s power jack, with all the weight and bulk of a staple. Somehow, this thin band of additional metal amplifies the force of the MagSafe 2’s magnet. Without adding anything visible at all, the Snuglet gives you a cord that doesn’t fall out (until someone actually does trip on it).

Find out more about the Snuglet here.

The Coin looks like a single credit card, but it stores the information from up to eight other credit, debit and ATM cards. You no longer need to stuff your wallet with them. A tiny screen on the Coin lets you specify which card you want it to impersonate. Then you swipe it normally.

As a bonus, the Coin ($100; lasts two years) knows how far away it is from your phone. If you leave the Coin behind on some restaurant table, your phone pings to let you know.

The Coin’s creators are seeking funding directly from the public, bypassing Kickstarter altogether. If all goes well, the Coin will be available this summer.

But remember: What counts in the Pogie awards is the idea. And this one — a single, universal card that can defatten your wallet by 90 percent — is a giddily great one.

Read more about the Coin here.

E-books for the treadmill

We might actually use fitness equipment if it weren’t so stultifyingly boring.

Unfortunately, you can’t read while you’re on a treadmill, StairMaster or elliptical trainer because your head is bouncing up and down — unless you clip a new gadget called the Run-n-Read to your shirt collar or headband. Incredibly, the text on your tablet now bounces up in down in sync with your head. That’s right: It jiggles vertically on the tablet’s screen, but to your eyes, the page appears mostly motionless.

When I tried a prototype, I was impressed by the technology. Alas, I was also crushed: The Run-n-Read requires its own e-book reading app that accepts only public-domain books; no copy-protected Kindle, iBooks or Nook books. Maybe that’s one of the reasons the Run-n-Read, which sought Kickstarter-style crowdsourced funds, didn’t reach its fundraising goal and is now in limbo.

But remember, the Pogie awards are for the brilliance of ideas — some that never even see the light of day.


Goji Play ($100) is another Bluetooth motion-sensing clip, again intended to work with a tablet as you endure your workout. This time, though, you’re playing games. Controller buttons strap onto your treadmill’s handlebars; your activity controls your movements in the games. For example, in "Smash the Blocks," your character moves forward, smashing evil blocks, only when you’re actually running or biking or StairMastering.

This workout-boredom-killer is a real, shipping product — and a really good concept.

If you have a Moto X smartphone, you can pay $15 more for a Skip: a small, fabric-covered clip that goes on your sleeve, collar, belt or whatever. Now you can unlock the phone by tapping it on the clip. Through NFC (near-field communication) technology, you can skip having to enter a password 100 times a day.

You also get three Skip stickers. You can attach them wherever you spend a lot of time, like your desk, your bed, and your spot at the dinner table. Here again, you can unlock the phone with a tap against the sticker.

Along with the fingerprint-reading Home button on the iPhone 5s, this technology stakes a terrific new position on the spectrum between security and convenience.

A new button on your Android phone

Here’s another Kickstarter success story — a project that sought $40,000 from the public and wound up earning $700,000 from enthusiastic fans.

Pressy (preorder for $27, coming in March) is an additional physical, clicky button for an Android phone. You snap it into the headphone jack.

What does this new button do? Just about anything you want. The companion app lets you set up the button to enter or exit Silent mode, take a picture, turn on the LED flashlight, start recording audio, call a chosen number, go Home (in case your Home button is broken) and so on.

You can preorder a Pressy here.

And now, ladies and gentlemen, please rise for the presentation of the biggest prize of all: the Pogie Ultimo!

Every year, surveys say the same things: We hate our cellular carriers. We rank them down somewhere between drug dealers and Congress.

In 2013, T-Mobile had an idea that will wind up affecting millions of people — by making them happier. It has methodically been eliminating one despised carrier practice after another.

It eliminated the two-year contract: You can now leave T-Mobile whenever you like, with no penalty. It eliminated the data overage charge: If you use more data than you’ve paid for this month, your Internet speed drops, but you’re not penalized. It eliminated the 15 seconds of airtime-eating instructions when you want to leave a message (“To page this person, press 7, followed by the pound sign, followed by your Social Security number…”).

T-Mobile even eliminated the usurious roaming charges that afflict Americans when they travel abroad — charges so terrifying, most of us just shut off our phones over there and use them as paperweights. With T-Mobile, you get unlimited free texting overseas, unlimited free Internet data overseas and phone calls to 115 countries for 20 cents a minute.

Tearing up the cellphone-carrier business plan is radical. It’s bold. It’s a huge embarrassment — and, hopefully, inspiration — to Verizon, AT&T and Sprint.

And it’s the best new tech idea of the year.

(Correction: A previous version of this article stated that Apple unveiled fingerprint reading technology for the iPhone 5c. It was actually unveiled on the iPhone 5s.)

We have more to preview for you! Read all of our holiday articles here, and like us on Facebook for more.