We may earn commission from links on this page, but we only recommend products we believe in. Pricing and availability are subject to change.
3
Rick Broida
January 17, 2023, 1:36 PM·7 min read

You know the old saw: Money can't buy happiness. But you know what it can buy? An insanely large TV. And the 85-inch Hisense U7H is making me pretty damn happy. Sports, movies, sports movies...everything looks better when it's borderline theater-size. You'll definitely pay a premium to make the jump from 65 or 75 inches to this mammoth expanse, but is it worth it? Short answer: Yes. If you can afford it, and your living room has the space, this is a fantastic TV. Here's my Hisense U7H review. 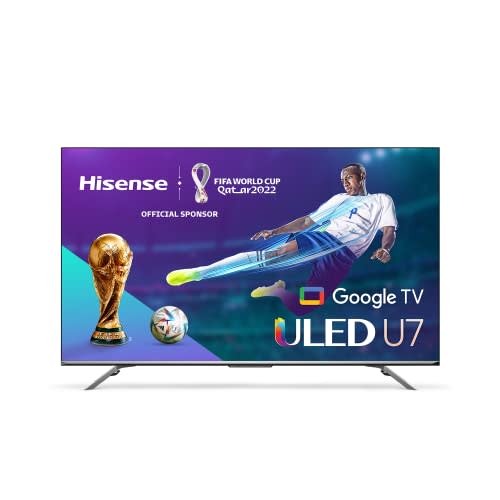 Dazzling color on a mammoth screen — what's not to like? The Hisense U7H transforms your living room into a home theater without breaking the bank, though your account might be happier with the much cheaper 75-inch model.
$2,751 at Amazon

This is currently the only 85-inch model in Hisense's lineup; the U6H and U8H series each top out at 75 inches. But you really should break out the tape measure before choosing this size; read my story "Can a TV be too big?" to learn more.

You should also make sure there's room for a soundbar, something I recommend for all TV purchases. The U7H has built-in speakers, of course, but they're small and underpowered and simply don't do justice to a screen of this size. Here are the best soundbars of 2023 if you want some ideas.

Hisense U7H: Easy to set up?

This beast of a TV will require at least two people to unbox and set up. If you're not planning to wall-mount it, you'll need a stand that's at least 18 inches deep, as the two included feet span 17.8 inches. Thankfully, you can install those feet either 55.1 or just 24.4 inches apart from each other, which is nice if you have a tabletop that's deep but also narrow.

I appreciated that the included quick-setup guide includes customer-support information right up front: a toll-free phone number, hours of operation, a service e-mail address and a QR code you can scan to get a much more complete instruction manual. I highly recommend accessing that, as the printed guide covers just the basics.

The U7H relies on the Google TV operating system, which should look and feel familiar to Android phone users. I consider it the second-best TV OS out there, easier to learn and navigate than Amazon's Fire TV but not quite as simplistic as Roku. The good news is that the U7H has four HDMI inputs (two of them HDMI 2.1, important for gaming), so you can plug in your favorite streaming device — Apple TV, Fire Stick, Roku, etc. — and still have room for cable boxes and game consoles.

(Side note: I use a Roku Streambar Pro, which provides not only a great soundbar but also my preferred Roku interface. On occasion I'll switch back to Google TV so I can take advantage of its built-in Chromecast, which lets me stream content from my phone or tablet.)

Regardless of what you end up using, you'll need to complete the Google TV setup process, which is time-consuming and occasionally agonizing (because there are so many questions to answer and settings to configure). You'll also need the Google Home app on your phone; if you don't already have it, it's one more thing to download, set up, etc. Even after plowing through all that, I had to wait what seemed an eternity while the TV downloaded and installed various apps.

The U7H supports hands-free voice commands courtesy of Google Assistant, though you can also configure it to recognize Amazon Alexa commands if that's your preference (though setting that up is a pain). Much as I love this capability, I can't use it to its fullest because of my aforementioned Roku usage. If I ask Google or Alexa to, say, "play Ozark on Netflix," it can do so only within the Google TV OS. But that's a software limitation; it's not a ding on the TV itself.

As with most modern TVs, you should also plan on spending some time in the settings to tweak the picture to your liking. For example, the first thing I do with any new TV is turn off motion smoothing, which creates the dreaded "soap opera effect." To my surprise, however, the U7H required few additional picture adjustments, at least for my tastes. Everything else looked pretty dazzling right out of the box. Speaking of which...

Modern TV nomenclature includes things like Quantum Dot, Dolby Vision, local dimming and so on. I'm of the opinion that few people understand all that stuff and fewer still care about it; they just want a bright, colorful picture that looks good in all lighting conditions. Thus, I'm going to focus less on the super-techie details and more on the end result: How satisfied was I watching the likes of NFL playoff games, Mythic Quest (Apple TV+), Welcome to Wrexham (Hulu) and The Batman?

Answer: very. No; extremely. The U7H had no trouble smoothly rendering the action in fast-moving football, even with smoothing effects disabled. Welcome to Wrexham, a docuseries about the "other" football (i.e., soccer), exhibited vibrant greens on the pitch (i.e., field) and vivid blues and reds in the players' kits (i.e., uniforms).

The Batman, a notoriously dark outing for the Caped Crusader (and I'm not talking about the plot), revealed superb contrast in scenes that would trip up lesser TVs, including overhead spotlights catching criminals on rainy nighttime streets. This movie is virtually all shadows, but I never had trouble seeing what I was supposed to be seeing.

Interestingly, the only visual oddity I encountered was in Mythic Quest, Season 3. Several episodes contain scenes in a stark white hallway, where I noticed significant gradations (also known as posterization) on the walls. Just to be sure, I watched the same scenes in the Google TV OS (as opposed to Roku) and found this banding of white hues barely noticeable. After poking around the TV's picture settings, I noticed that certain options were grayed out. The culprit behind all this? My Roku Streambar had been set to 4K HDR at 30 frames per second, not 60 frames per second. Once I made that change, the settings returned and the posterization problem all but vanished. Go figure.

You might consider this a point in favor of using a TV's built-in OS over a plug-in alternative, and I'll admit you're less likely to run into such oddball problems. That said, in every other respect the U7H performed like a champ (with the Roku, I mean). It's bright when it needs to be, great with dark scenes and gloriously colorful throughout.

I'll ding the remote, however, for lacking dedicated fast-forward and reverse buttons (you use the directional pad for that), and for not being backlit. I think an $1,800 TV should include a remote you can see in the dark. At least it has six streaming-service shortcut buttons; my Roku remote has only four.

Hisense U7H: Should you buy it?

I'll just come out with it: This is my favorite TV I've ever tested. Granted, I tend to evaluate mid-tier and entry-level models, but I'm struck by just how good the U7H is for the price.

But here's the thing: Right now you pay a significant premium for an 85-inch screen. The 75-inch U7H, which is identical in nearly every single way, is currently priced a whopping $700 less at $1,098 (and can often be found discounted to $900). Yes, it's 10 inches smaller on the diagonal, but still pretty huge for most living rooms. Either way, you get a two-year warranty, which is unusual for any TV. I appreciate that a lot.

Indeed, whatever size you choose, I have no qualms about recommending the Hisense U7H. Like many modern TVs, it's a bit of a pain to set up, but once you get past that it's smooth sailing. Whether you're looking for a big-screen splurge for the Super Bowl or a screen that can do cinematic justice to shows like The Mandalorian, this TV will make you mighty happy.

Dazzling color on a mammoth screen — what's not to like? The Hisense U7H transforms your living room into a home theater without breaking the bank, though your account might be happier with the much cheaper 75-inch model.
$2,751 at Amazon