We may earn commission from links on this page, but we only recommend products we believe in. Pricing and availability are subject to change.
1
Rick Broida
December 1, 2022, 8:22 AM·5 min read

There's something magical about turning a wall into a movie screen. One minute it's just an empty slab of drywall; the next, a 100-inch theater showing the new Batman movie. (There's always a new Batman movie, right?) Even better is when you can move this magic outside to your driveway or backyard. But there must be a ton of equipment involved, right? Not necessarily: The Xgimi Elfin mini projector packs everything you need into a flat, compact package. It's my favorite "instant home theater" projector to date, mostly because it's the easiest to use. And while it normally sells for $649, right now you can get the Xgimi Elfin for just $479. 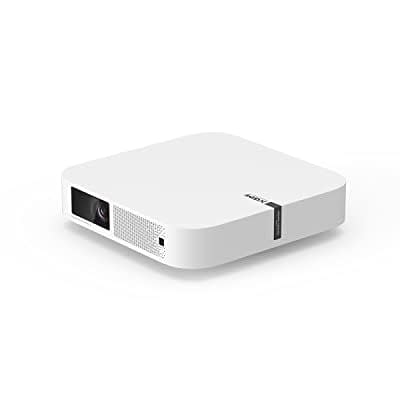 $479$649Save $170
Compact enough to sit on the arm of your couch, the Xgimi Elfin nevertheless projectors a sharp, bright picture on your wall. And it comes with Android already built in; all that's missing is Netflix.
$479 at Amazon

Weighing in at a little over two pounds, the Elfin measures a mere 7.5 inches square and 1.8 inches tall. It could easily slip into a suitcase or briefcase for travel purposes. However, unlike some mini projectors, this one lacks a battery. To operate it, you'll need AC power.

Assuming you leave it plugged in after your initial setup, the Elfin resumes from standby mode in about five seconds, which is fantastic. Many projectors I've tested take anywhere from 30 seconds to a full minute to start up.

Although 1080p resolution is a far cry from 4K, a native-4K projector would cost you considerably more. (Xgimi's Horizon Pro, for example, runs $1,699.) So although you're not going to get the razor-sharp resolution afforded by, say, your living room TV, I found the Elfin's image quality to be quite good overall: crisp, colorful and certainly sufficient for the likes of family movie night.

As for brightness, 800 ANSI lumens is way above average for a mini projector. (Look at cheaper models and you're likely to see 200 to 400 ANSI lumens — which, incidentally, is the only measurement that matters. Any manufacturer can claim "8,000 lumens!", but that's meaningless. It's the ANSI rating you want.) Even so, you probably won't be happy watching in full daylight, which results in a fairly washed-out wall. But in a lamp-lit room, the Elfin performs very well and absolutely crushes it when it's dark. It runs very quiet, too.

I was also extremely impressed by the projector's automatic focus, keystone, sizing and obstacle-avoidance capabilities. In a nutshell: Point it at the wall and it'll produce a perfectly rectangular, perfectly focused image with little or no manual adjustment required. And if there's, say, a piece of wall art encroaching on the projection, it'll shift the image accordingly.

In my tests, I set the Elfin on the arm of my couch, below and to the left of the screen mounted on my wall. Within a few seconds, the skewed, too-large image magically scaled to fit the screen — a thing of beauty to behold. Proper projector positioning can be a huge hassle; the Elfin makes it easy. (That said, there's a standard threaded tripod mount on the bottom, just in case the arm of your couch isn't the ideal locale.)

There's another feature I absolutely love, and that's the built-in Android 10.0 operating system. Right out of the box, you can stream nearly every popular app: Hulu, Disney Plus, Prime Video and so on. And if you're already an Android user, the interface looks and feels very familiar (right down to the Google voice assistant accessible via the remote).

Unfortunately, I said "nearly," as there's one important app missing: Netflix. Actually, it's not missing; it's installed, and you can get as far as signing into your account and choosing something to watch — only to be greeted with an aggravating "account not supported" message. This owes to a longstanding licensing issue, and although Android supports "casting" from various devices, you can't use, say, your phone or tablet to fill in the Netflix gap.

Rather, the only way to get Netflix is to plug in a streaming device like a Roku, Fire TV or game console — which you can do, at least, thanks to the available HDMI input. I connected a Google Chromecast (currently $30 at Best Buy) and was then able to stream Netflix via my phone. This is a hassle, no question, but at least the fix is inexpensive, and the Chromecast was able to draw power from the projector's USB port — no additional AC cord or outlet required.

Elfin audio is mixed: The projector squeezes a lot from its dual 3-watt Harman Kardon speakers, which can get pretty loud. But they're physically small, with little bass to speak of, so the sound feels rather "small" as well. Thankfully, you have the option of connecting an external speaker via Bluetooth, headphone jack or the aforementioned HDMI (ARC) port.

My only other hardware complaint is with the remote, which isn't backlit and therefore hard to use in a dark room — at least until you memorize the button layout. It's fairly intuitive, but I'd gladly pay a few extra bucks for a backlit remote.

Xgimi Elfin mini projector: Should you buy it?

I really, really like the Elfin. It's considerably brighter than similar projectors in the same price range (like the Anker Nebula Solar and Xiaomi Mi Smart Compact), and it's a breeze to use thanks to automatic picture adjustment and onboard Android. However, it lacks a battery, so it's not quite as portable as the Solar, and it can't play Netflix like the Mi.

If those two shortcomings aren't dealbreakers for you, I can wholeheartedly recommend the Xgimi Elfin. It comes very close to portable-projector perfection and it's reasonably priced. All you need is a wall and you're ready for some theater-style movie nights.

$479$649Save $170
Compact enough to sit on the arm of your couch, the Xgimi Elfin nevertheless projectors a sharp, bright picture on your wall. And it comes with Android already built in; all that's missing is Netflix.
$479 at Amazon